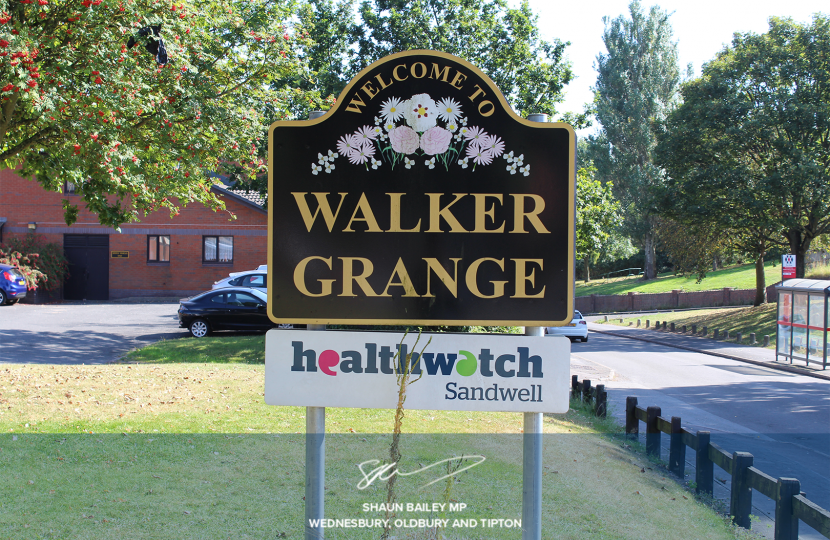 Shaun Bailey, MP for Wednesbury, Oldbury and Tipton, this week raised the campaign to save Tipton based care home, Walker Grange, with the Prime Minister, Boris Johnson. Mr Bailey made his comments in the House of Commons, following the Prime Minister’s announcement on the future of the NHS and Social Care.

Walker Grange Care Home, which is made up of 39 one-bedroom flats, will shortly undergo a consultation by Labour-led Sandwell Metropolitan Borough Council, which could see the care home close.  The consultation has been launched following the council deeming it under - occupied.

The proposed consultation has caused outrage in the local community, with local residents calling it is ‘an insult to staff’. A petition opposing the closure has been launched in response, which at time of print, had received over 800 signatures.

It was recently revealed that Sandwell Metropolitan Borough Council had underspent their allocated social care budget by a projected £2.058 million.

Local MP, Shaun Bailey, has been championing this issue since the consultation was proposed, vowing to undertake any action necessary to save the care home from closure.

Speaking in the House of Commons, Mr Bailey said:

“Additional investment is welcome, but that has to come with assurance. My constituents in Tipton, because of the Labour party, are getting turfed out of their care home, despite a £2 million underspend by Sandwell Council on adult social care.”

“Can my right hon. Friend [Prime Minister Boris Johnson] assure my constituents in Tipton that their campaign to save Walker Grange care home is not in vain? Will he ensure that assurance comes with the investment to stop the Labour party turfing out some of the most vulnerable people in my community?”

Reflecting on his remarks, Shaun said:

“We all saw what Sandwell Council’s so-called leader, Rajbir Singh, did in regard to Goldicroft Park, and if he wanted to, he could do the same again for Walker Grange Care Home and its residents”

“We don’t need this consultation and the distress that this situation is causing residents, some of whom are the most vulnerable within our community, is a disgrace. It is obviously that Tipton, and its residents, are not that important to Rajbir”.

Over Recess, Shaun has been fighting for the residents of Walker Grange Care Home, to help stop Sandwell Council from kicking them out.