Shaun Bailey MP tackles Crime and ASB across the Constituency 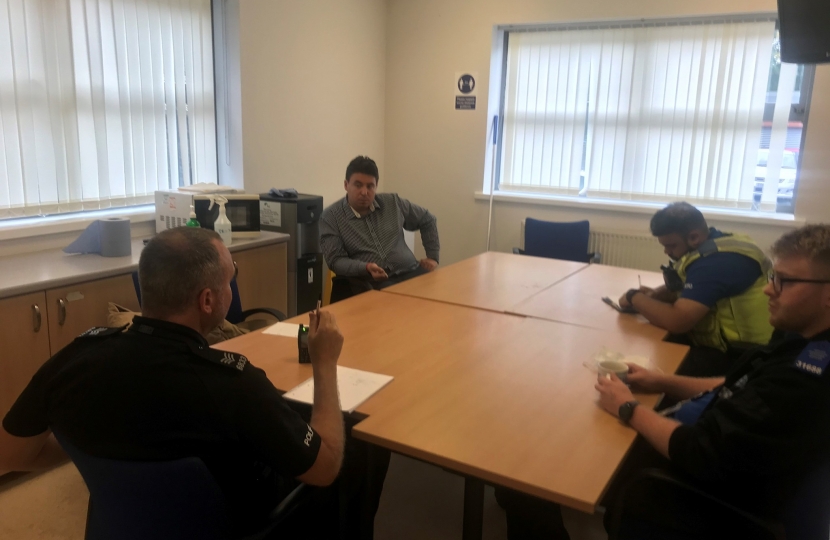 In recent months, Shaun has held frequent meetings with stakeholders, including Sandwell Council and local neighbourhood policing teams, to develop a long-term strategy to tackle ASB and crime within Wednesbury, Oldbury and Tipton.

Shaun met with retailers, alongside officers from Sandwell Council and the local neighbourhood policing team, to discuss the levels of crime and ASB taking place in Great Bridge, in particular, Great Bridge Retail Park. In recent times, the retail park has acted as a breeding ground for ASB, with staff members and shoppers harassed, when making their way to and from the carpark.

As a result of the meeting, Shaun successfully secured an increased in police presence within the Park, with officers undertaking regular patrols throughout the month of August.

Shaun previously met with Sergeant Giles to discuss the levels of crime and ASB across Oldbury and the issues facing residents. Shaun is looking forward to joining him and his fellow officers on a patrol in the near future.

Shaun also met with Sergeant Rock from the Tividale Neighbourhood Team, to discuss how the West Midlands Police are dealing with ASB and how Shaun can best assist. Shaun will be working with Cllr Emma Henlan to ensure that the extra measures agreed upon, help to keep Sandwell safe.

In the coming weeks, Shaun will also be arranging meetings with additional local police teams within Wednesbury, Oldbury & Tipton, to discuss how ASB can best be tackled across our three towns. Shaun has been working on this long-standing issue for some months now, and he will continue to do so, until all his residents feel safe.

I know that crime is an issue many feel passionate about across the constituency. This survey is for you to tell me how you think crime should be dealt with in our communities of Wednesbury, Oldbury and Tipton.