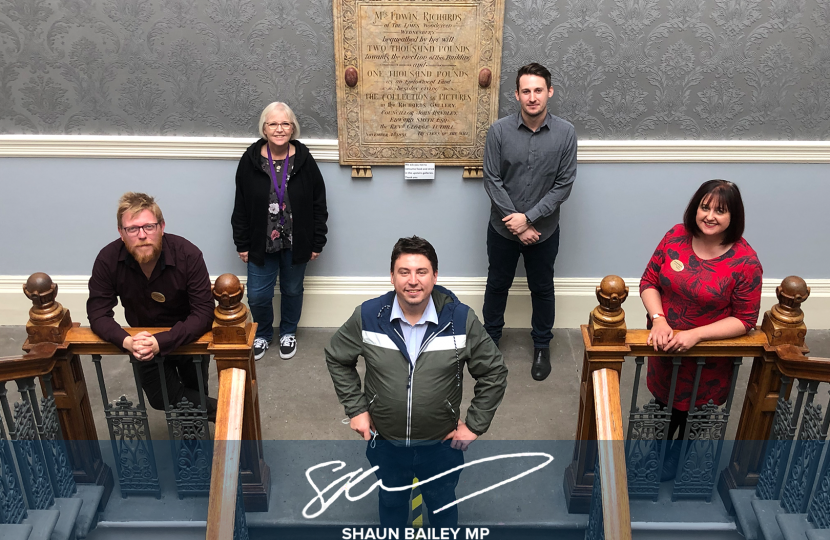 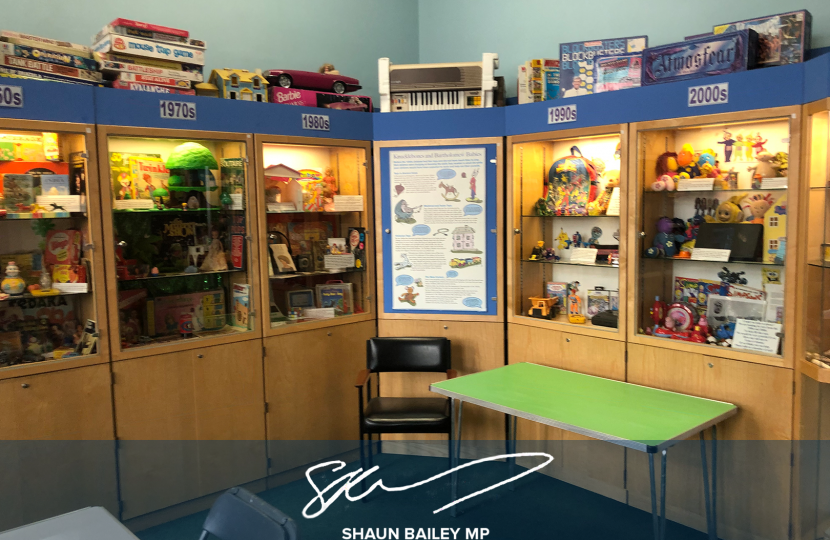 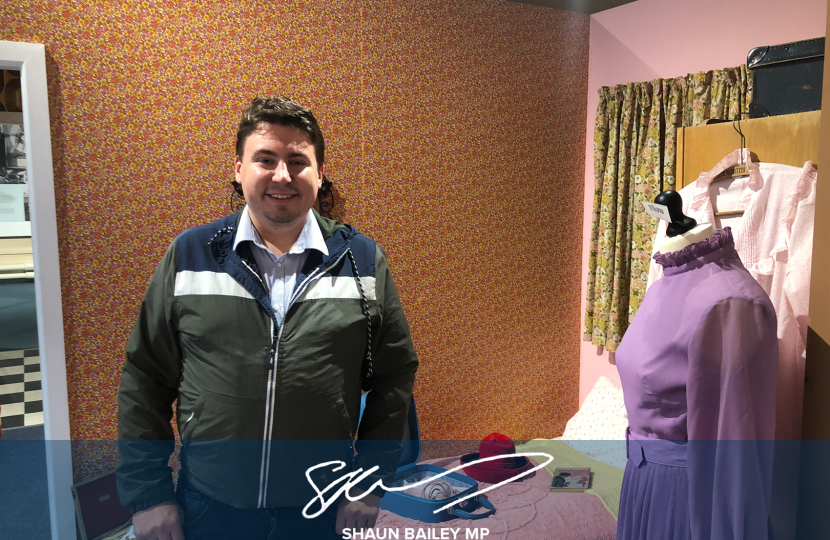 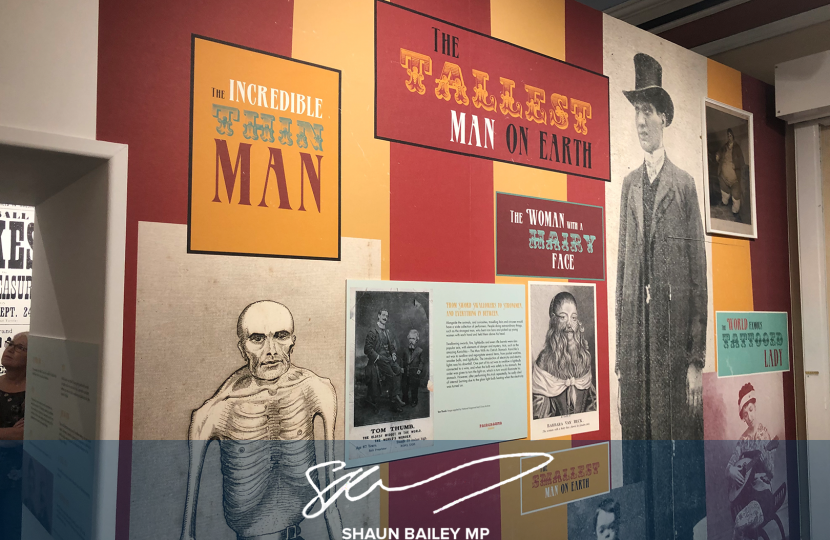 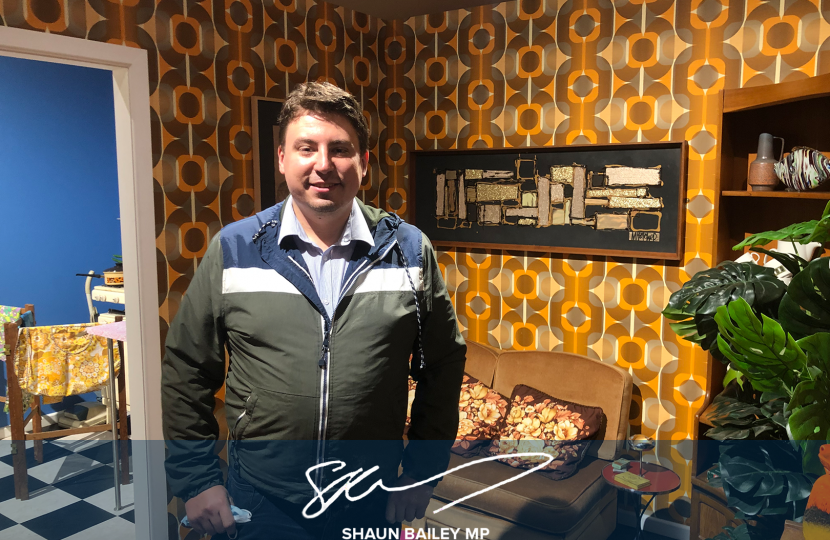 Last Week, Shaun Bailey MP visited Wednesbury Museum and Art Gallery. This Museum is the only purpose-built museum in the Borough, however it is also the only museum not yet re-opened to the public due to flooding that has occurred earlier this year. Before it closed it's doors during the Coronavirus Pandemic, Wednesbury Museum and Art Gallery saw over 12,000 visitors a year; as residents across Wednesbury and, wider, Sandwell came to see the variety of exhibits on display.

The Local History Exhibit Room will soon be host to a new venture between Sandwell Museums and Beatfreaks. The exhibit will be curated by young people of colour including handpicked artefacts, and will be supplemented by pieces of artwork created by the young people of colour to display their interpretations of the artefacts on display.

The 'Play' Room exhibits toys and artefacts from different decades. The items on display have been collected through various means; such as donations from local residents, and museum staff raiding their lofts to find their childhood toys. The Staff discussed with Shaun their eagerness for children to touch the items, they explained that any items that they didn't want to be touched in the room they put behind the glass, and that they encourage those to play with the toys that are out and about. They previously have had all sorts of things in the 'play' room, the room is what they use to record their in-house podcast, and before the pandemic they room hosted live animals brought in for the children.

There is also a room that hosts a local group for art of all abilities, which the Staff at the Museum have been keeping in close contact with during the Pandemic. The group meet to create a variety of art, whilst having a social aspect of a drink and a conversation with other group members.

Upstairs, their nostalgia rooms are various smaller rooms modelled after different eras in the Black Country. They have a 60s Bedroom, and 70s Living Room, and a historic kitchen. The rooms are appreciated by all visitors, as they can all link a piece in the room to their childhoods. Dementia patients have been brought to the nostalgia rooms to help them maintain and re-connect with their memories. The stove in the kitchen was used by the family who donated it since it was bought in the 60s up until a few years before the present day - the stove was even converted from 'manufactured gas' to natural gas so it could continue being used!

The fairground exhibit was set to debut in April 2020 before the Coronavirus Pandemic, the exhibit celebrates how the fairground shaped the Black Country. The exhibit has lots of information on where the various fairs visited across Wednesbury, Oldbury, and Tipton; and the powerful figures behind the fairs who ran them. Shaun learned how those who were involved in the 'freak show' aspects of fairgrounds made a lot of money and were better off than if they were not in the freak show. The Staff described the freak show as a Victorian equivalent of fly-on-the-wall shows we have today. The Northern Soul/Vespa Exhibit planned for next year to take the place of the Fairground Exhibit will be shipped to Vespa's HQ afterwards for the company's 'birthday'.

The museum is also home to one of the largest Ruskin Pottery Galleries in the world. The 'recipe' for the pottery was kept secret by Ruskin and his staff so it died with him. The pottery is so thin and fragile that the staff have had to take extra care in placing it in the display case.

The main room plays host to classic pieces of artwork, however the staff argue the main attraction is the local community artwork hung up at various points in the year. They explained, a modern abstract artist with the tagline 'Creams' exhibit his work in the museum, before a consultant came to visit the museum and the artwork was shipped off to be exhibited in Paris!